put their best foot forward as they stepped into the national spotlight during the halftime show at the 2016 NFLPA Collegiate bowl. The event was founded in 2012 by the National Football League Players Association to highlight top college athletes heading into the NFL draft.

Led by sophomore sensation Drum Major Kevin Keys, the Sentinels danced, marched, and grooved their way right into the hearts of thousands of fans in attendance; and thousands more watching on live television. “We were nervous but our training got us through it,” said tenor drummer Lizandro Bautista.

Under the direction of Conrad Hutchinson III, the band led with soulful and hip hop inspired tunes such as Blurred Lines, Hotline Bling and Worth It. The Sentinels band captivated the crowd and left no doubt that their reputation is well deserved. So what’s their secret of success? Ask any band member and their answer is always the same: Conrad Hutchinson III. His enthusiasm and knowledge of show style performance, motivates his students to be at their absolute best.

In fact, over the course of nearly four decades at Inglewood High School, Hutchinson is also leading the school’s celebrated concert and jazz bands in addition to serving as mentor to countless students in beginning to advanced band classes. He is so ingrained in the lives of students and faculty alike, that school leaders decided to memorialize his name on the two-story Fine Arts Building at the edge of campus – now officially known as the Conrad Hutchinson Center.

“We are all so proud of them,” added IUSD Community Liaison Kenmoria Woodson. She expressed how when the band started to play during the halftime show, the person sitting next to her said, “They’re great! What college is that?” Kenmoria proudly turns and says, “That’s the Inglewood HIGH SCHOOL Marching Band!” 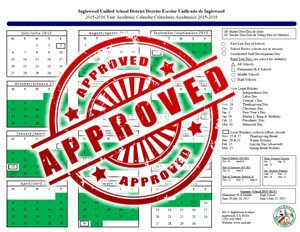